I was listening to my cable providers music on demand station, the oldies station, and a song named “Patches” came on. There’s apparently TWO songs from the era named Patches, but they aren’t about the same Patches because one’s a boy and one’s a girl. This particular Patches was about the girl one. Dickey Lee sings of, “Patches my darling of old Shantytown,” with whom he was planning a summer wedding. Did this wedding happen? NO! His parents forbade it for no reason, sings Dickey. WHY!!?????

Well, it turns out, as poor Dickey overhears:

“I hear a neighbor telling my father
He says, a girl name of Patches was found floating face down
In that dirty old river that flows by the coal yards”

Uh, ok then. Dickey then sings of joining her that evening blah blah blah. Anyway, I looked at the album they had listed for it and it was: Last Kiss: Songs of Teen Tragedy. All the great teen deaths are there, from Leader of the Pack to Teen Angel! So many dead teens!

There are fourteen songs on this CD. Each more tragic than the next. But, they forgot a few:

1. “Braces,” about a boy (Johnny) and a girl (Judy) who made out and got their braces stuck together and starved to death.

When her momma came looking for her
all she found was a towel and sunglasses
she was just a sunburned cutie, a sun tanning amateur

3. “Lil’ Escalator Girl,” he never learned her name, he was at the mall and saw her from afar, then her shoelaces got caught in the escalator and all her skin came off.

But, Johnny didn’t want to sweep the cave floor
He ran away.
His sabretooth pelt got caught in a branch.
I saw him struggling, but there was nothing I could do.
A t-rex got him and ripped him in half.
Now I have to go to the dance….alone.


5. “Goodbye My Bicycling Baby,” about a responsible teen who thought motorcycles were too dangerous but ironically dies in a bicycling accident.

7. “My Little Teen Funeral Girl,” this is about a girl who’s at another teen’s funeral (parachute didn’t open) who dies in a freak folding chair accident at the cemetery.

8. “Mama, Since You’re Dying Anyway, Can You Get a Message to Johnny?” lyrics:

Mama, I’ve got a message for Johnny
I’ve written down every word
If you end up croakin’
can you pass it on to him?

The bible says you can’t bring
personal possessions to heaven
but maybe, just maybe,
you can bring
other peoples’ notes

9. “I’ll Never Forget You (Because the Death of A Boyfriend is Just Generally Something You Don’t Forget)”

10. “Soda Shop Angel,” this would have been the saddest of all the teen tragedy songs if there weren’t three verses about the singer continuing to send his food back for various reasons.

11. “Angel Angel,” about the ghost of a dead teenager (running with scissors mishap) being exorcised from the house he was haunting, thus “dying” again and becoming a double angel, very rare.

12. “Why Couldn’t the Fire Ants Have Swarmed Me, Instead?” a young man’s lament at a romantic picnic gone wrong.

The Academy Awards are the American film industry’s highest honor. This year’s telecast is sure to be an exciting production of people dressed in fancy clothes walking up to the stage and accepting a statue if they win. Here’s some fascinating facts I guarantee you don’t know about Hollywood’s big awards show.

– Originally, The Academy members voted for Best Picture based on whether a movie had the same name as chicken parts, which is why Wings won the first award in 1928. After that, everyone agreed to go on merit.

– The design of the actual award went through a few changes before the final product was produced. I’ve been lucky enough to get my hands on the original concept art:

– In 1975 they phased out the category “Best Cigarette Smoking.”

– In 1989 Rob Lowe sang a cheesy duet with Snow White, which we all wish we didn’t remember, but just the year before Charlton Heston and Bambi did an incredibly awkward number which is rarely ever mentioned these days.

– In 1988, there was an unprecedented three-way tie for Best Supporting Actor. The Fat Boys split the vote and each took home a statue for the 1987 film Disorderlies.

– Meryl Streep has won three acting Oscars, one for Makeup for “Harry and the Hendersons,” and one for writing the original song “It’s Hard out Here for a Pimp.”

– Two-time winner and a nominee this year, Daniel Day-Lewis is well known for his method acting. As a child, before he forged his parents’ signatures on his report cards, he would spend days in their clothes.*

– Never won an Oscar: Cary Grant, Marilyn Monroe, James Dean, BIg Bird, Me, my cat Elliott, everyone who lives on my street, the last person who sold me a lottery ticket, and George Washington (fun fact: this is a real fact).

– If you’re a seat filler, and for whatever reason, if you are in a winner’s seat when that winner is announced, you get the award. AND, if you thank the original winner’s spouse or significant other, you get to take them home for the night.

– Hannibal Lecter was going to be called “The Psychiatrist Who Kills His Patients and Then Eats Them” or “The PWKHPTET Killer” until some astute person pointed out to Thomas Harris that “Cannibal” rhymes with “Hannibal.”

– Friday the 13th is based on true events – one time some teenager smooched.

– The Exorcist is based on true events – one time there was a priest.

– Halloween is based on true events – there’s Halloween.

– The original Freddy Krueger rhyme was – “One, two, Freddy’s comin’ for you/three, four, when he sleeps he snores/five, six, route 66/seven, eight, better clean your plate/nine, ten, what were we talkin’ ’bout, again?”

– There’s  never been a movie about a nightmarish killer who murders you while you’re on the toilet because the inevitable pee-pee dances would take away from the suspense and terror of trying not to use the bathroom.

– The Cabinet of Dr. Caligari has nothing but expired medication in it. He was a very bad doctor.

I get e-mails from Zulily all the time. Zulily is “daily deals for moms, babies, and kids.” I’ve bought stuff for my niece and nephews from them and they also have sales on non-children/mom type stuff but I find it more fun to imagine that all of the merchandise is for kids. Today they are having a sale on rustic decor, and here is one of the things you can buy:

Mom: Oh! I have to show you – we redecorated Billy’s room!

Houseguest: Ok, great….what’s that hanging from the ceiling?

Mom: Oh, it’s a hook. I got it for sale at a great price. Billy likes to hang his stuffed animals from it. I’ve told him if he pokes a hole in one more teddy bear he doesn’t get to have any more.

P.S. You can get this fabulous costume for your little one here.

This evening Tom and I are going to see Raiders of the Lost Ark at the movies in IMAX. Yayah. There’s still time for you to go see it, more info here. To commemorate this awesomeness, here’s some amazing things I know you don’t know about the movie: 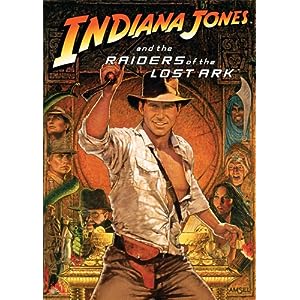 – Before they settled on the name “Indiana Jones,” they were considering: South Dakota Smith, Florida McGee, and Rhode Island Kwemenphefferbrankly.

– That monkey was actually a Nazi. He nailed the audition, so they changed the role to fit him  better.

– Harrison Ford isn’t afraid of snakes but he IS afraid of fedoras. He spent the whole movie shoot in fear.

– The big boulder in the famous opening sequence was made from hundreds of thousands of wads of chewed gum, then rolled in dirt for authenticity.

– The Ark of the Covenant was actually an elaborate cooler that kept the cast and crew’s sandwiches cold. Someone in the prop department suggested they use it in the movie.

– The original name for the movie was “Indiana Jones in the Best One of Four.” They changed it at the last minute because it didn’t make sense at the time.

– George Lucas was inspired to write the scene where Marion Ravenwood gets lost in a basket because that happened to him once.

– The movie was made and marketed for five dollars.